The Fraunhofer Research Institution for Additive Production Technologies (IAPT), Hamburg, Germany, has conducted a redesign project for the arm of a door hinge for a high-profile sports car using Additive Manufacturing to highlight the benefits of the technology. The additively manufactured part reported approximately 50% lower cost and 35% weight savings compared to an equivalent milled part.

Aided by a special software tool that is commercially available at 3DSpark, a Fraunhofer IAPT spin-off, the Fraunhofer engineers first identified a suitable component. They then determined the cost-optimal orientation of the component in the AM process. Using the optimised orientation, it was possible, for example, to minimise the number of support structures required while maximising the number of components that could fit on a build platform. The identified component orientation is reported to have led to cost savings of 15% compared to an AM process without such optimisation.

In the next step of the redesign, the structure of the hinge arm was optimised in a targeted manner, using one of the benefits of Additive Manufacturing in that it enables completely new component geometries explains Fraunhofer IAPT. This gave the component a basic shape that only contained material where the simulated force flow required it. In total, this reduced the weight of the door hinge arm by a reported 35% and, due to the reduced material requirements and the shorter build time, the costs compared to AM without structural optimisation dropped by another 20%.

Any support structure that does not require removal saves time and avoids part of the significant costs incurred in the highly manual post-processing phase. Reducing the number of support structures in the design also has a positive effect on production time and material requirements, which cuts costs again by 10%. Skilful selection of the optimum metal powder material from the increasingly broad portfolio of AM materials makes it possible to lower costs by another 10%.

Additionally, adjusting the AM process parameters provides further ways to reduce costs. For example, higher layer thickness during Additive Manufacturing, optimisation of process parameters, and deformation of the laser beam profile significantly reduce build time. Even though this results in a slight loss of parts quality, (though still superior to that of cast parts), it enables AM costs to be reduced by a further reported 15%. Optimising machine utilisation by nesting and, if necessary, stacking in the build area, leads to further cost savings of 10%.

Summarising the redesign project results, Fraunhofer IAPT reporters that designing with Additive Manufacturing in mind and following a ‘design-to-cost’ approach throughout allowed the hinge arm to be manufactured at 80% less cost than an additively manufactured part without the same optimisations. This overall percentage can be broken down as follows: orientation and topology optimisation, as well as support optimisation, contribute 45% and optimised material selection, speed parameters and workload maximisation in the AM process reduce costs by a further 35%.

Fraunhofer IAPT was able to show that a cost reduction of AM by a factor of five is feasible. In parallel, brought an increase in the technical performance of the vehicle through lower weight and improved optics. The most important point, however, is that this enabled the cost of manufacturing a small series of hinge arms for a sports car door to be reduced by 50% compared to conventional milling. The organisation concluded that Additive Manufacturing is therefore not only superior to milling in terms of technical performance, but also significantly more cost effective. 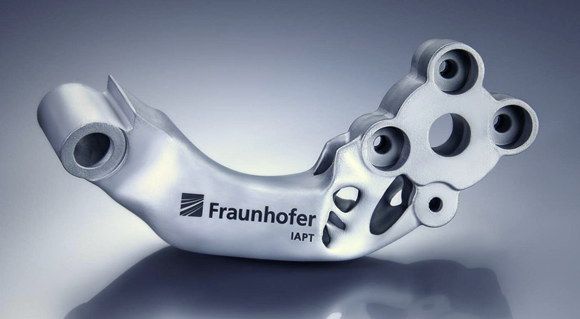 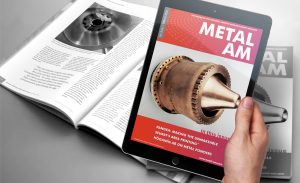