DM3D Technology, Auburn Hills, Michigan, USA, has partnered with Alabama’s Auburn University’s National Center for Additive Manufacturing Excellence (NCAME) on its AM research and development project to improve the performance of liquid rocket engines. Most recently, the company was tasked with additively manufacturing a rocket nozzle liner demonstrator for a large-scale liquid rocket engine and, at approximately 3 m in height, it also had to develop a machine large enough to build it.

“Knowing that the technology we’re developing for the RAMPT project could support future exploration missions is extremely gratifying,” stated Bhaskar Dutta, president of DM3D. “Auburn and NASA are very much at the forefront of AM research, and we began working with them around four years ago to print a nozzle that was approximately two feet [60 cm] in size, which seemed large at the time. Now we’re printing one for the RAMPT program that’s five times that height. This is one of the largest rocket engine components ever 3D printed.”

The exact dimensions of the two-ton additively manufactured full-scale RS-25 nozzle liner are 282 cm in height and 244 cm in diameter. The massive part was built over the course of several months – a greater than 50% reduction in processing time compared to traditional manufacturing techniques.

“DM3D’s cutting-edge technology and NCAME’s expertise in materials characterisation and qualification will continue the advancement and infusion of these technologies into future missions, and allow for industry to continue to build upon this development for other new large-scale applications,” commented Nima Shamsaei, NCAME director and Auburn’s technical lead for the RAMPT project. 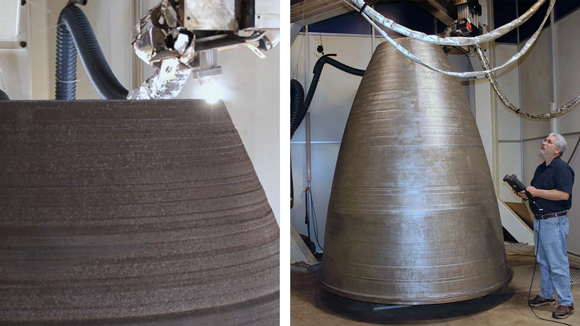