The LHC, the largest and most powerful particle accelerator ever built, is located one hundred meters beneath the mountains of Switzerland, and used by CERN to conduct high-energy physics research under four key experiments, including the Large Hadron Collider beauty (LHCb) experiment, which specialises in investigating the slight differences between matter and antimatter by studying a type of particle called the ‘beauty quark’, or ‘b quark’.

The LHC stretches 27 km to allow particle acceleration to get up to speed, with observable reactions taking place at four beam-crossing points instrumented with large particle detectors. Within the detection volume of the LHCb experiment, a long and extremely narrow photon-detector strip must be cooled to -40˚C in order to preserve the reaction for study. This strip runs roughly 140 m in length, is less than 2 mm wide, and is attached to additively manufactured titanium cool-bars that perform 100% of the cooling operation.

3D Systems used its Laser Beam Powder Bed Fusion (PBF-LB) technology to produce the cool-bars, and was awarded the 2019 LHCb Industry Award for its contribution to the successful upgrade of the experiment.

Particle collisions within the LHC take place inside detectors, which are extremely sophisticated systems that make it possible to gather information about fundamental particle properties. Modern detectors include layers of subdetectors, among them tracking devices like the LHCb SciFi tracker – short for scintillating fibers – that reveal the path of a particle. Through other subdetector systems, it is also possible to measure a particle’s energy and radiation.

Antonio Pellegrino, who works at Nikhef and is a leader on the SciFi tracker project at CERN under the LHCb experiment, explains that the complexity of the cooling system is the result of several unavoidable factors: the incredibly limited space in which the cool-bars are required to fit, the heat that needs to be dissipated within that short space, the temperature uniformity required over the length of the entire photon-detection strip, and the flatness of the cool-bars necessary to preserve the detector efficiency and resolution. “The effect of this is that you have to be very efficient in how you construct your cooling,” he stated.

Rob Walet, Nikhef Project Engineer, began developing the cool-bar by designing a part that catered to performance requirements. Walet commented, “This design was so beautiful, but it was not producible in the usual ways.”

A major issue that complicated manufacturability through conventional means was the required wall thinness. For maximum efficacy, it was important to have minimal material between the coolant and the surface to be cooled. For the length of the part (263 mm), this thinness could not be machined.

After early experimentation with manual prototyping, CERN determined a manual approach to production was not practical. Not only was it labour-intensive, but it was extremely difficult to make reproducible. With this in mind, the team began to research other options and explore the capabilities of metal AM.

Collaborating to optimise cool-bars for production by Additive Manufacturing

Although CERN had optimised its cool-bar design for its final function, it was not yet optimised for Additive Manufacturing, and it was this that informed its choice of manufacturing partner.

“Out of a few possible companies, we chose 3D Systems because it seemed to me that the engineers there were capable of actually transforming our design into something that could be produced,” reported Pellegrino.

CERN collaborated with 3D Systems’ Customer Innovation Center (CIC) in Leuven, Belgium, to accelerate its adoption of AM. Through a collaborative iterative process of design, Additive Manufacturing and testing, the engineering teams at CERN and 3D Systems worked together to modify the cool-bar design to meet the requirements for manufacturing as well as the final function.

There were three performance requirements for the parts, a crucial one being their wall thickness of 0.25 mm. This was achieved by taking advantage of the high dimensional accuracy of 3D Systems’ DMP machines, with the help of the company’s in-house expertise to adjust laser parameters with respect to the stability and width of the titanium powder melt pool.

The second requirement was leak-tightness, which led to the selection of LaserForm® TiGr23 material, a high-strength titanium alloy, for the parts, aided by a custom parameter set developed by 3D Systems for the project.

The final requirement was flatness. It was necessary for the flatness of each cool-bar to have a precision of 50 µm over the length of the 263 mm part. This was achieved through various Design for AM (DfAM) strategies applied by 3D Systems’ application engineers, as well as build strategy recommendations like a vertical build orientation.

Enabling reliable manufacturing with metal AM

Optimising the cool-bar design for production was critical to achieving the final order of more than 300 precision units. According to Pellegrino, the key value of using Additive Manufacturing for production was the cost-efficiency of the process relative to the extreme complexity of the components, as well as the ability to achieve the uncommon tolerances that were necessary for the success of the final application. “We needed a reliable way to get both the part and the performance we were after,” he commented.

3D Systems offers a systematised approach to transitioning and scaling from prototyping to production which helps to ensure a streamlined path to qualified AM parts. The company’s manufacturing guidance across the project included:

Based on stress testing, the cool-bars installed at CERN are expected to last a minimum of ten years. Although Pellegrino notes that only time will tell, he believes the cool-bars will prove more reliable due to the limited assembly enabled by AM, and the ability to build an optimised form in a single material.

According to Pellegrino, Additive Manufacturing was a major benefit to the team at CERN, and the success of this project has sparked interest in AM from colleagues who have not used it before. “3D printing really brings in new possibilities. You can really push it,” he concluded. 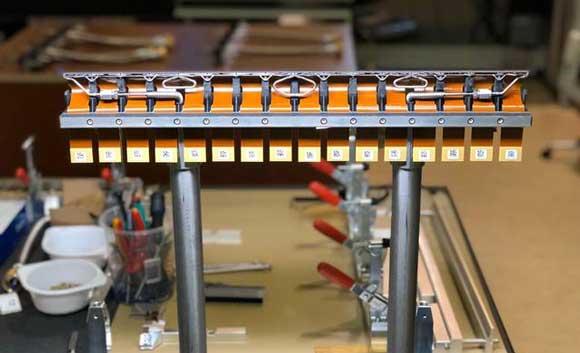