Fleet Space Technologies, Beverley, Australia, has successfully launched its Centauri 5 satellite on the Space X Falcon 9 Transporter-5 mission. In what is said to be a world first, the all-metal patch antennas are all entirely additively manufactured.

The advances in Additive Manufacturing technology used in the construction of its patch antennas also feed into the development of the forthcoming fully additively manufactured micro Alpha constellation, scheduled for launch in 2023. Together, the two systems are intended to provide continuous coverage, data rates up to 520 kbps and tailored frequency bands servicing current and future generations of IoT devices.

“We’ve built our business and reputation by consistently delivering on our stated goals, and developing technologies that address real human and commercial needs reliably and cost-effectively,” stated Flavia Tata Nardini, CEO and founder, Fleet Space Technologies. “Centauri 5 will bring important new capabilities to our existing constellation. It also supports the development of our forthcoming Alpha constellation, which enables our pioneering ExoSphere mineral exploration tool with transformational benefits for the exploration of critical energy transition materials.”

Digital beamforming provides extra gain, increasing the data rate, and also allows the S-Band frequency channels to be reused on the different beams. This combination increases the satellite’s data capacity by 2.6.

Centauri 5 will be placed in LEO at an expected altitude of approximately 530 km (330 miles). A 6U sized microsat with a total weight of 12 kg, is anticipated to add capacity, reduce latency and provide additional network redundancy in the existing six-strong Centauri constellation, which Fleet operates in collaboration with Tyvak International, Torino, Italy.

This was the company’s third launch with SpaceX, following the successful deployment of Centauri 4 on the Transporter-2 mission in June 2021. The Centauri 5 launch is intended to strengthen Fleet Space’s position in the burgeoning Australian space technology industry, which the federal government predicts will be worth $12 billion and create an additional 20,000 jobs by 2030. 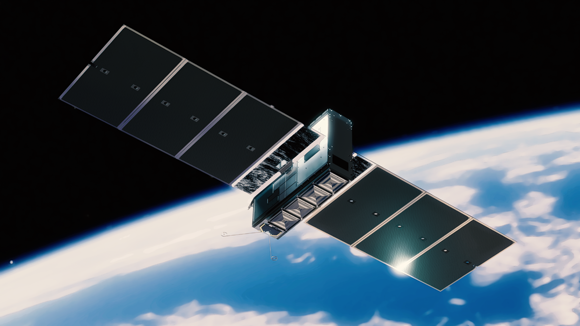