SPEE3D, headquartered in Melbourne, Australia, reports that its WarpSPEE3D metal Additive Manufacturing machine was deployed by the Australian Army and trialled during a field exercise in the Northern Territory this week. The trial was used to demonstrate the potential for the company’s metal AM technology when deployed in a military scenario.

WarpSPEE3D offers large-format metal Additive Manufacturing,  using the company’s patented cold spray technology. According to SPEE3D, this enables significantly faster and more cost effective metal part production than traditional manufacturing. It is capable of building metal parts up to 40 kg at a speed of 100 grams per minute.

The metal AM machine arrived in Darwin, Australia, in early June, and a little over a week after its installation at the Australian Army’s Robertson Barracks, soldiers from the 1st Combat Service Support Battalion (1 CSSB) transported the AM machine to the Mount Bundey field training area, 120 km south-east of Darwin.

During the three-day trial, the WarpSPEE3D was manoeuvred to various locations and unloaded on different terrains. The AM machine was unloaded and operational within thirty minutes, producing a variety of additively manufactured parts.

The Australian Army announced a $1.5 million investment in a pilot of SPEE3D technology in February 2020, with a twelve-month trial designed to test the feasibility of deploying metal AM machines both on-base and in the field. SPEE3D states that it partnered with the Advanced Manufacturing Alliance (AMA) and Charles Darwin University (CDU) to deliver the programme with soldiers from the Australian Army 1st Brigade training in Additive Manufacturing at CDU since February. The programme aims to significantly increase the availability of unique parts to the army compared to what the regular supply chain can provide.

“The first field deployment of WarpSPEE3D was an important milestone for SPEE3D,” stated Byron Kennedy, SPEE3D CEO. “While our equipment was initially designed for industrial use, this trial proved that our equipment is actually very robust and can endure harsh conditions and rough handling very well. We look forward to future exercises and continuing to learn how we best serve the Australian Army and defence industry.”

Michael Gunner, Northern Territory Chief Minister, explained that the Territory is spearheading innovative technology, cementing the NT as a manufacturing hub of the future.

Wright commented, “This phase has seen the 3D printing capability deployed to the field, alongside vital military equipment, contributing to the mission during this training cycle.”

He added, “The ability to print repair parts in an environment like this has the potential to significantly reduce our footprint and repair damaged equipment – on the spot – to get us back to our main priority.” 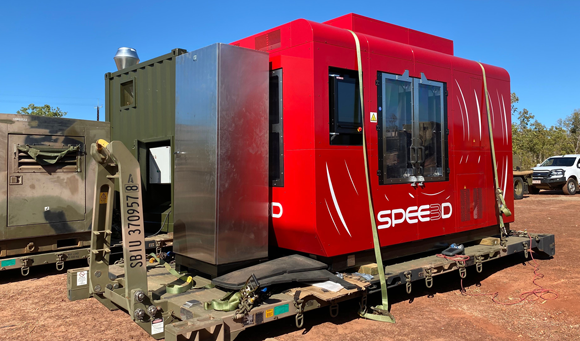